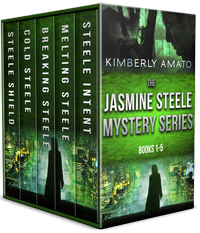 This bundle of Kimberly Amato’s complete Jasmine Steele detective series is made-to-order for fans of hard-boiled police procedurals and badass female sleuths… not to mention bargains! Those who can't get enough of the exciting new wave of hard-boiled women sleuths, created by writers like Megan Abbott, Laura Lippmann, Lisa Lutz, and Vicki Hendricks will love Amato’s take-no-prisoners style, her unflinching attention to harrowing detail, and her tough-as-nails but soft-hearted detective.

Lovers of traditional mysteries will appreciate the web of fierce loyalty tempered with fearful caution that links Jazz’s tiny but hardy support system—both at work and at home. In every tale, Amato manages to mix all the excitement of an action thriller with the swirling emotions of a mainstream psychological novel.

STEELE INTENT
“Don’t think you’re untouchable…you or your son.” Then a dial tone…
Home is no haven with that that kind of caller on the line. Shrewd, hardened New York homicide detective Jasmine (“Jazz) Steele’s just come back from a grisly crime scene involving the body of a brutally-beaten young girl, the second she’s investigated this week. That was horrendous, but with these eight words, ending ominously in “your son,” Jazz’s immediate fear is for her nephew Chase, who’s already been through hell in his seven short years. In Kimberly Amato’s hard-boiled yet deeply emotional police procedural, no one is spared tough breaks and turbulent anguish. A lesser cop than Jazz would barely be able to cope.

With a shadow on Chase and the aid of her friends’ grace-under-fire and brandy-fueled heart-to-hearts, Jazz–who has more ‘tude than even the toughest investigator, male or female–navigates the cruel streets of New York City while struggling to keep custody of the only family she has left, doggedly in search of the elusive, psychopathic murderer who seems to be killing off women who look suspiciously like someone close to Jazz… and she’s not willing to lose yet another person she loves.

MELTING STEELE
In Jasmine Steele’s heartbreaking new case, an entire family’s been viciously murdered. Hard-boiled alert: author Kimberly Amato pulls no punches.The mother’s throat was slit while trying to call for help and the father was shot in the chest, then gruesomely sliced up while still alive, like a scene from a horror film. Also found, the body of their young son, about Jazz’s son’s age, left in the closet with a snapped neck.

But it’s the remaining clues to a missing fourth victim–a teenage daughter named Kaley–that leave her reeling. Kaley’s seemingly disappeared without a trace.

Soon Jazz discovers that the family had plenty of disturbing skeletons in its closet. Skeletons possibly warranting hiring a hit man on the Internet…

BREAKING STEELE
Gory video game violence comes home to roost when two store managers are brutally murderedin the back room of their gaming shop just before peek holiday season. The corporation that owns the store is doing everything it can to keep the matter quiet—but they won’t succeed if detective Jasmine Steele cracks the case. Because said corporation has plenty of skeletons in its closet; and one of them is far too familiar to our heroine…

Kimberly Amato serves up a heart-pounding, chilling addition to the Jasmine Steele hard-boiled mystery series—a fast-paced police procedural that’s as gripping as it is eerily personal. And it comes with a captivating (although, as Jazz might say, a slightly “nerdy”) bonus: a heaping dose of the fascinating ins and outs of video game subculture. Which is far more murderous than the average reader would suspect.

Jazz gets a rude awakening when a 3-year-old cold case comes back hot. New York City’s “Carnation Killer,” a serial rapist and murderer, leaves his fifth calling card on a woman named Emilia Smith. The calling card? A heart-shaped carving into the woman’s chest and a single white carnation.

Emilia’s last night alive was spent at a college bar that sparks Jasmine’ least happy memory – the very same establishment that served as a backdrop to her own early adult years, a past defiled and traumatized by a dangerous man. Just as Jazz is finally happy in her personal and professional lives, her bone-chilling trauma comes rushing back. And the Carnation Killer is still out there.

Jasmine’s nearest and dearest find themselves tangled in a web of terrifying cyberbullying, hair-raising stalking, sexual harassment, and murder—with Jazz stuck in the middle. Jazz heads up an investigation that quickly falls down the sordid rabbit hole of the darker, more twisted side of social media, all the while fearing for her loved ones.

Other Books in "Jasmine Steele Collections" 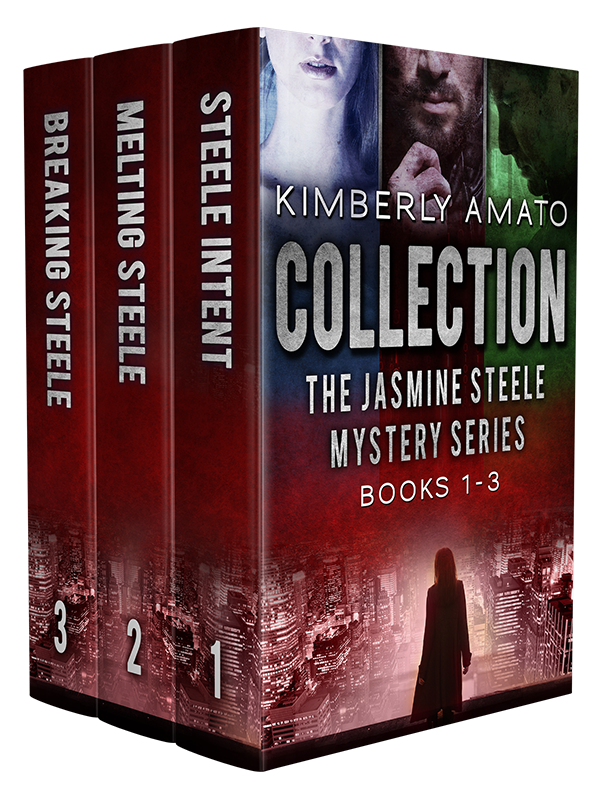 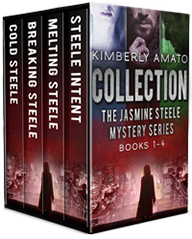 Jasmine Steele Mystery Series Books 1-4
Disclosure of Material Connection: Some of the links in the page above are "affiliate links." This means if you click on the link and purchase the item, I will receive an affiliate commission. I am disclosing this in accordance with the Federal Trade Commission's 16 CFR, Part 255: "Guides Concerning the Use of Endorsements and Testimonials in Advertising."