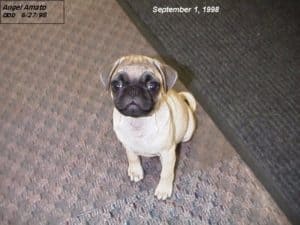 My friend said to me that when we adopt animals we never think about the eventual decisions we have to make on their behalf. In 1998, my mom called me out to her car and said she had a package in the front seat. No one knew what the heck was going on, but I figured “tall person”, as my mother calls me, had to carry it in. What I found on the front seat was a sleeping, as small as my left hand, snoring lightly – Pug. She was more than adorable and I hated to disturb her, but I so desperately wanted to hold her in my arms and snuggle her. Once I did, she nibbled on my index finger. She had darn sharp teeth and from that moment on her name was Angel. Most people think it was due to her adorable demeanor, but it was that and her nibbling. If anyone watched Buffy you would remember her boyfriend Angel – kind and loving but a vampire… so that was where her name truly came from.

Angel quickly grew and took over the house. Toys were everywhere and on more than one occasion she decided to explore the town on her own… with my entire family on bikes, roller blades and in cars trying to catch her. Her energy was infectious and her hip dysplasia never appeared to slow her down. However, around 2007-2008 we took her to the vet because she was walking funny. We found out Angel had three bad discs in her spine. If we did nothing, her quality of life would decrease or we could spend a good chunk of change to have spinal surgery.My mother and father thought long and hard about it. I remember them asking my opinion once. I believe I mentioned having knee surgery and how they didn’t put me out to pasture. If she was truly a member of the family, then I felt she deserved everything we could give. I don’t think my parents needed my diatribe, I feel they had already decided to let her have the surgery. So, they shaved her back, fused those three vertebrae together and my doggie went to physical therapy for a long time. It was rather amusing to me, but she loved her therapist and when I tell you she healed like a champ – she truly did.

My mother and father thought long and hard about it. I remember them asking my opinion once. I believe I mentioned having knee surgery and how they didn’t put me out to pasture. If she was truly a member of the family, then I felt she deserved everything we could give. I don’t think my parents needed my diatribe, I feel they had already decided to let her have the surgery. So, they shaved her back, fused those three vertebrae together and my doggie went to physical therapy for a long time. It was rather amusing to me, but she loved her therapist and when I tell you she healed like a champ – she truly did.

It took several years for her fur to grow back, but she was moving like the old puppy I barbecued with. Yes, she was my barbecue buddy. Always by my side, maybe waiting for a piece of chicken I always grilled just for her, or maybe because she was my sidekick – either way I was never alone. She was always with me… watching television snuggled between my legs, laying on my feet while I wrote a paper, next to me when I was sick – Angel gave me love unconditionally.

After many years, thyroid medication, vet visits and more – my barbecue buddy was slowing down. She still had a bounce in her step and a bite with her bark, but she was older. My wife and I took over caring for her, taking her on walks – sending her with my dad to the vet so he was the heavy [evil grin]. She wasn’t jumping in my gardens as much as she used to, if at all. Her back was sore, her hips and paws filled with arthritis – yet she kept plugging along. I gave her medicine to keep her pain down and I swear on a warm New York day that puppy would sunbathe and run around as if she was three, maybe four.

The week before I went away, Angel was struggling. For some reason we were out of her thyroid medicine and had forgotten to get it, so I figured her lack of eating was due to that. Once we got her pills, she moved a little better and she was taking her medicine with ham only.  I got on a plane fearful of what I would come home to. My father told me not to worry – he would take care of her. So my wife and I went away.

During the trip, I would call my dad and ask how she was doing. I was told all was well and the dog was still a pooping machine. It was our running gag that a dog so small could poop so much. He didn’t want me to worry about things. He wanted me to enjoy my vacation. He had apparently taken her to the vet and the assistant told my father, it was time. There was nothing more they could do. My dad brought her home and waited for me. It was my dog and my decision. 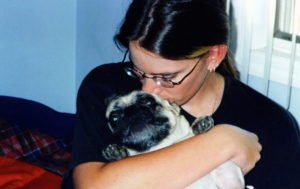 Nothing prepared me for seeing her when I got home. I brought food bowls to her with ham, anything to get her to eat. I brought her water, but she avoided it. She never moved out of her bed, she just moved around trying to get more comfortable. At one point I heard her paws on the tile; I jumped with so much excitement and gave her a Dentabone, her favorite treat. She didn’t eat it. When she made it back to her bed, she laid there resigned. We rang the doorbell – no response. Jumped around to get her to play – nothing. The final straw was her lack of barking while we cooked. She was always silent. Sheila and I both knew what had to be done, but could I bring myself to do it?

I sat with the vet, my eyes pleading for her to say there was something we could do to help her – save her. There was nothing. So, I started crying instantly and agreed to let her go. The vet gave her a shot to calm her down, relax her if you will. Then she gave her the injection that made all the pain go away. The vet left, tearful in her own right. Sheila and I sat there, hysterical as one would expect. I just kept petting her, almost willing her to wake up. I wrapped her up in a blanket I got her eons ago and told her I loved her. At a certain point you become delirious in your grief and leaving is more of a motor activity than anything else. The tech’s took her away wrapped like a puppy burrito and asked if I wanted her blanket or leash. I donated the leash to someone else – my mom made it.. someone should have it. The blanket… it was her favorite so it was with her for cremation

It’s the oddest feeling, knowing you have signed a piece of paper saying it was okay to remove the life of a living creature.  I still don’t know how to explain this emptiness I feel. It’s like a hole the size of Texas in my heart. I signed a piece of paper removing my dog from life support if you will. My wife and I still struggle with this. Heck, I am struggling that I could have done more to help her stay alive. I am second guessing my every decision leading up to her passing. That being said, was it the right decision – Yes. Was it an easy one – not in the slightest. I feel horrible about my emotions. I lost my uncle, my friend’s mother and my sister-in-law’s grandmother the day before. I surely should feel more torment over them than a puppy – but I don’t. 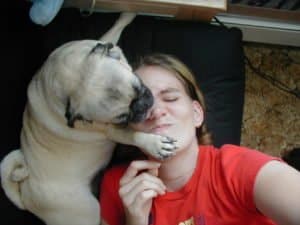 Her ashes are home now. Sheila and I were going to put them in the garden but decided against it. Should we move, we want her with us always. I feel better having her nearby. Call it creepy or whatever you like – it helps me and my wife deal with our loss. In the meantime, I am finding the most solace in the poem my friend Bonnie forwarded to me.

Rainbow Bridge:
“All the animals who had been ill and old are restored to health and vigor. Those who were hurt or maimed are made whole and strong again, just as we remember them in our dreams of days and times gone by. The animals are happy and content, except for one small thing; they each miss someone very special to them, who had to be left behind.

They all run and play together, but the day comes when one suddenly stops and looks into the distance. His bright eyes are intent. His eager body quivers. Suddenly he begins to run from the group, flying over the green grass, his legs carrying him faster and faster.

You have been spotted, and when you and your special friend finally meet, you cling together in joyous reunion, never to be parted again. The happy kisses rain upon your face; your hands again caress the beloved head, and you look once more into the trusting eyes of your pet, so long gone from your life but never absent from your heart.
Then you cross Rainbow Bridge together…. Author unknown”

I pray she is playing in heaven with Tuffy, Cheetah, Princess and all my grandmother’s other dogs. Maybe my grandparents are there watching them run free in the biggest dog park the animals have ever seen. Maybe, if I am so lucky, when it is my time Angel will be there waiting for me with her head tilted as if to say “Where the hell have you been?” Maybe…